It had been a great day of skiing at Sugar Bowl, even though it had stormed all day. The storm had brought lots of that cold light powder snow Sugar Bowl ski area has been famous for. We had been riding the chairlift and skiing on during the storm. There was a poma lift and a rope tow lift too at Sugar Bowl, but the Disney chairlift was the only chairlift in the Donner area during the winter of 1946-47.

We were all so young, most of us just out of the armed forces after World War 2. This was a (later called ) Ski Club ski trip. We had met early that morning at the old Gibson Bus station on in for a ski club day outing at Sugar Bowl. Most of us skied at Soda Springs ski hill, where all they had was a J bar and a rope tow lift. Going to Sugar Bowl to ride the Disney chairlift was a really big deal to us. We of course rode on the tractor pulled sled from Soda Springs all the way into the Sugar Bowl. What a lot of happy laughing college kids, the Donner Blizzard underway was no problem for us at all

After the hard day of skiing in the storm and back in the bus at Soda Springs we were ready to head down the hill and go home. The bus lurched forward and out on old highway 40, heading down the hill when the leader started a head count. Something was not right, the count was wrong. Was someone missing? Someone asked where Grant Cox was and no one seems to know. The leader yelled at the driver to stop. He counted heads again. We were one person short!

Grant Cox was a really good skier and mountain man. He was older than most of us, mid 20s or so. Grant had been in the Rangers, a specially trained combat unit, trained to survive in any weather conditions. Survival skills were a Rangers main game. They were experts in survival. He would be O.K., probably just missed the tractor sled train leaving the bowl at . He was probably hoofing it out along the edge of Lake Van Norden. Nothing to do though but to send a party back up the road to look and if he was not on the road to check out the lodge at Sugar Bowl. A small party of volunteers got off the bus to go search, the rest of the group continued on to . A phone call later that night confirmed that Grant’s model A Ford was still parked at the Gibson Bus Depot, his ski-trooper ruck sack was found at the bottom of the chairlift where he had left it that morning. The search for Grant Cox, ex Ranger, Mountain Man, and expert skier was on.

The Donner Blizzard continued all night with more than four feet of new snow on the ground by the next morning. Many of the ski club members had returned by morning along with many volunteers from the Soda Springs and area. We formed a search party of about 25 people, headed by U.S.F.S. ranger Max Williamson. Later Constable Johansson from joined the party, representing . At Sugar Bowl, interrogation of ski club members in regards to who had seen Grant last, revealed that I had been the last one to see him. He had ridden up the lift with me at about 3:25pm just before the lift closed at 4pm. He was wearing a ski trooper reversible ski parka with the white side out. We got off the lift on top of in zero visibility. Grant turned east, headed toward the (a ridge of rock pinnacles along the highest ridge) and I turned toward the west, headed down the Meadow Run. Grant was not visible to me after about 20 feet of travel. This was my last run for the day since the storm had been very tiring.  The lift closed at and it was dark almost at once.

Bill Kline, head of the talked to the search party about snow safety. Bill said avalanches were going to be a major danger to our search party.   Bill introduced a Swiss ski instructor named Rusty who gave us a 30 min lecture on avalanche survival, telling us the avalanche danger was extreme and teaching us how to swim if we were caught in a avalanche. He warned us to stay away from the and the bottom of any steep north facing slopes. The bottom of was also to be avoided.  The search group was very somber. It had been snowing more than one inch each hour all night with no let up in sight. Rusty looked grim as we were divided up into search teams of 3. We had no radios or way to notify others if Grant was found (only the military had walkie talkies) so we were told the ski school bell would be rung which would be a signal to return to the lodge. My team was assigned to ride up the lift and ski along the ridge to the Crow’s nest (a rock pinnacle along the ridge to the west) calling out Grant’s name as loud as we could. After reaching the Crow’s Nest we descended in waist deep snow and plodded over to the upper end of Lake Van Norden. Most of the searchers were dressed in war surplus ski clothing, since regular ski clothing was expensive and not much of it was really on the market for us to buy. The mostly cotton and nylon ski parkas were soon soaked from the warming storm and felt like they weighed a ton. Our skis were made of laminated wood and equipped with cable bindings which when adjusted loosely, permitted our heels to rise up and made hiking in the heavy snow possible. We had to stop from time to time to scrape frozen ice from the bottom of our skis. This added to our labor in this deep soft snow. Most of our ski bottoms were pine tarred or painted with a coating to permit them to slide, and this worked poorly in this kind of snow.

Back at the lodge we found every one soaked and tired but willing to go out again. Several very loud roars were heard as avalanches thundered down from the and . We were warned again not to go near that area since it was too dangerous. This of course was the very area Grant was last seen heading for. We searched until dark and found nothing.

That night we were housed in the Chalet ( separate from the main lodge, it was equipped with bunk beds and was a less expensive way to stay at Sugar Bowl) and were fed bowls of hot beef stew and French bread which we wolfed down as only exhausted young men could do. We sat around after dinner and wondered if Grant could have gone south over the summit ridge and into the Onion Creek drainage. This was a wild steep area which drained into the north fork of the .  If we went down into Onion Creek in this very deep snow, how would we ever get back up the hill?   Lying in bed that night we listened to the wind howl and the snow blow against the windows of the chalet. I wondered where Grant, right at this moment could be? It stormed all night.

The storm continued for 4 more days with highway 40 closed most of the time. The storm turned so warm that it almost rained on our already soaked clothing. We had done every thing we could do, and it was not enough. The search was called off at this time.  The Sugar Bowl staff was to keep an eye out for Grant the rest of the winter and we agreed to meet the next summer for a ground search, after the snow had melted, but nothing was found.

To our great sadness, Grant Cox was never seen again, nor was his remains ever located.

Footnote:  This story first was published in the February 2008 issue of Sierra Heritage magazine. About 2 months later I was contacted by a woman, who someone had sent my story, who said she was on our ski-bus trip and had been with Grant Cox at Sugar Bowl that day. She also stated that she was engaged to marry Grant Cox. She reminded me that she had pounded on the bus door when the bus was ready to leave, to see if Grant was in the bus. Her call jarred my memory and I did remember her pounding on the door and asking about Grant. This was followed by our head count and the first discovery that Grant Cox was indeed missing. In her call to me, 62 years after our ski trip, she wanted to know if Grant had ever been found? I was in shock that this woman was still remembering our trip and still wondering if Grant had been found. I told her no” that Grant had not been found and then she mentioned “how hard it had been on Grant’s parents and her. Talk about a “ghost from out of my past”. I still cannot forget our loss of Grant Cox.

Skier with the Palisades in the background where we think Grant died in an avalanche.
A ski searcher on the ridge behind Mt. Lincoln in a storm. 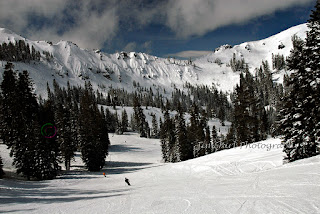 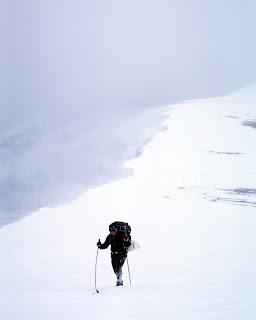