LIFE AND DEATH IN THE WILD

BY JIM AND SHIRLEY WHITE 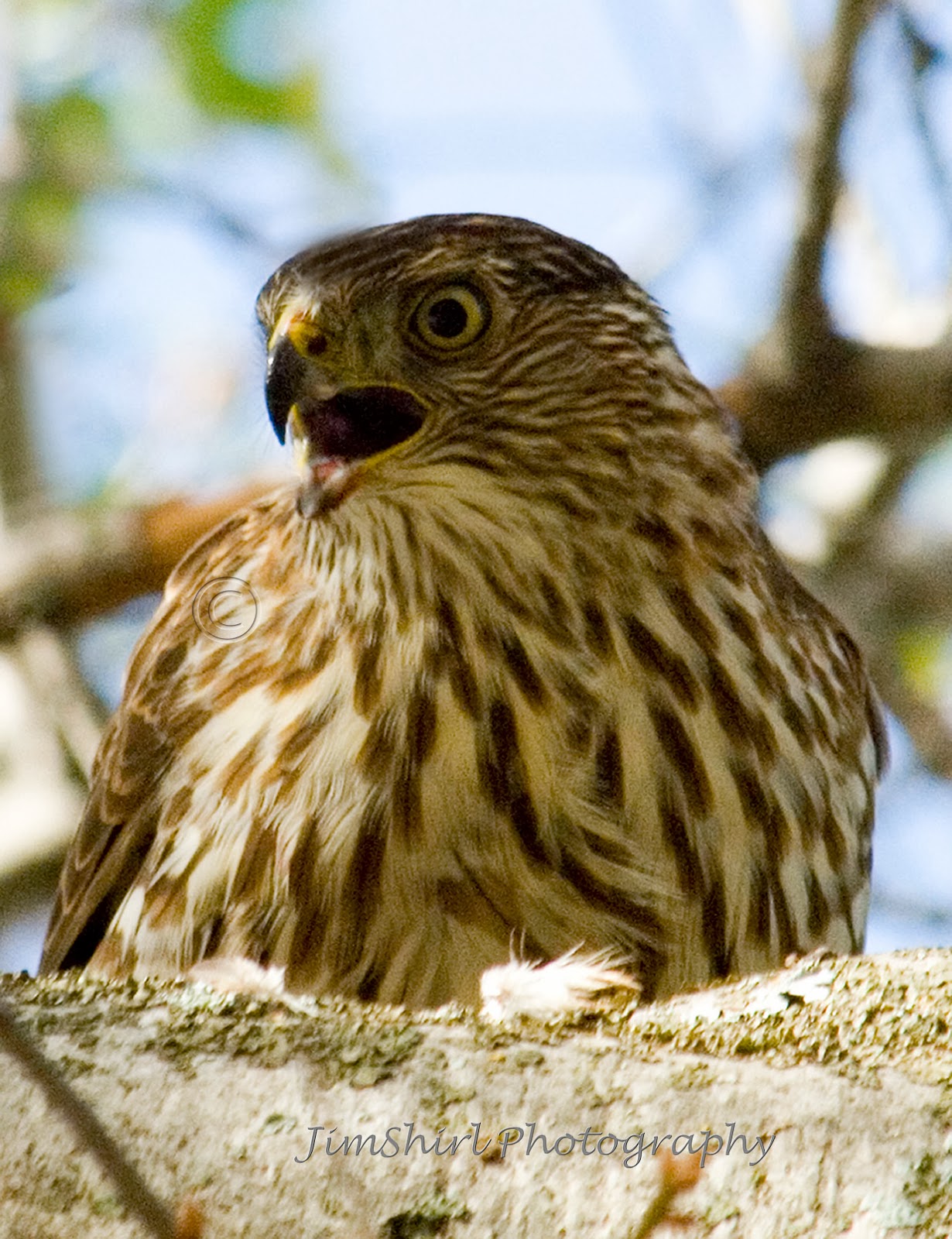 LIFE AND DEATH IN THE WILD
By Jim and Shirley White

I heard the screaming first. High pitched, not too loud, more like a frantic alarm or maybe a call for help. Then two black shapes, one larger than the other flashed in front of me, not twenty feet away, from right to left. I noticed the sharp pointed pair of wings silhouetted against the very bright sky. My brain on auto-reflex said “A falcon for sure”. The shapes did a tight 180 and spiraled down to the ground of our pasture, less than fifty feet away. The prey was still fluttering and screaming on the ground. The falcon bit down on the smaller bird and held on. The fluttering stopped. I started to scream out “hay you…stop it!” I could see the very red eyes of the falcon as he had now seen me move. He tilted his head watching me, maybe wondering what to do? The falcon was very dark blue above over a soft deep dark reddish chest. The top of the head was very black. A small bird and not a Peregrine.  A Sharp- Shinned Hawk?
How could I have such a childish impulse to interfere after all these years of wildlife work? Then I wondered where my camera with the long lens was? I wanted to see better. I ran into the kitchen and grabbed the binoculars from the table, and then back out on the deck. Then my logic took over and I realized I had just witnessed nature in action. That is why I was sitting on our deck watching all the birds nearby anyway.  A falcon had just made a kill. The glasses told me it was a Yellow Crowned Sparrow that was killed.  Nature at work I know. But, it was so breathtaking to see something die so quickly right in front of your eyes. My heart was beating so fast and I felt breathless.
This is not the first time this has happen in almost the exact same spot. The last time it happened even closer to the deck. I was sitting at the kitchen table, heard the screaming and the thrashing in the bushes under the Live Oak tree. I grabbed the camera and ran out under the tree. The first thing I saw up in the tree was the eyes, starring down at me. The killer in this case, a Coopers Hawk, was clutching its kill and sitting on a large limb up in the tree.  The hawk starting tearing his kill apart with his beak right away. Feathers were flying with the red blood colored meat easily seen in his beak.
I have watched a number of other wild animals die from a predatory attack. Coyotes killed a fawn, with my son Randy watching too. I asked him what we should do. He thought about it and said “nothing”. He was only 13 or so and I was very proud that he understood. Then there was the Mountain Lion in the early cold morning light, walking softly down the hill in the thick timber following a group of does and fawns that had just passed by. I saw the lion for maybe 30 seconds or so. Then he was gone. But I knew where he had gone when I heard the screams from the deer off to the right and up the hill a few minutes later.
In the wild, some die so that others can live. Makes sense and I understand. In the “civilized” world people die violently all the time for reasons no one understands. 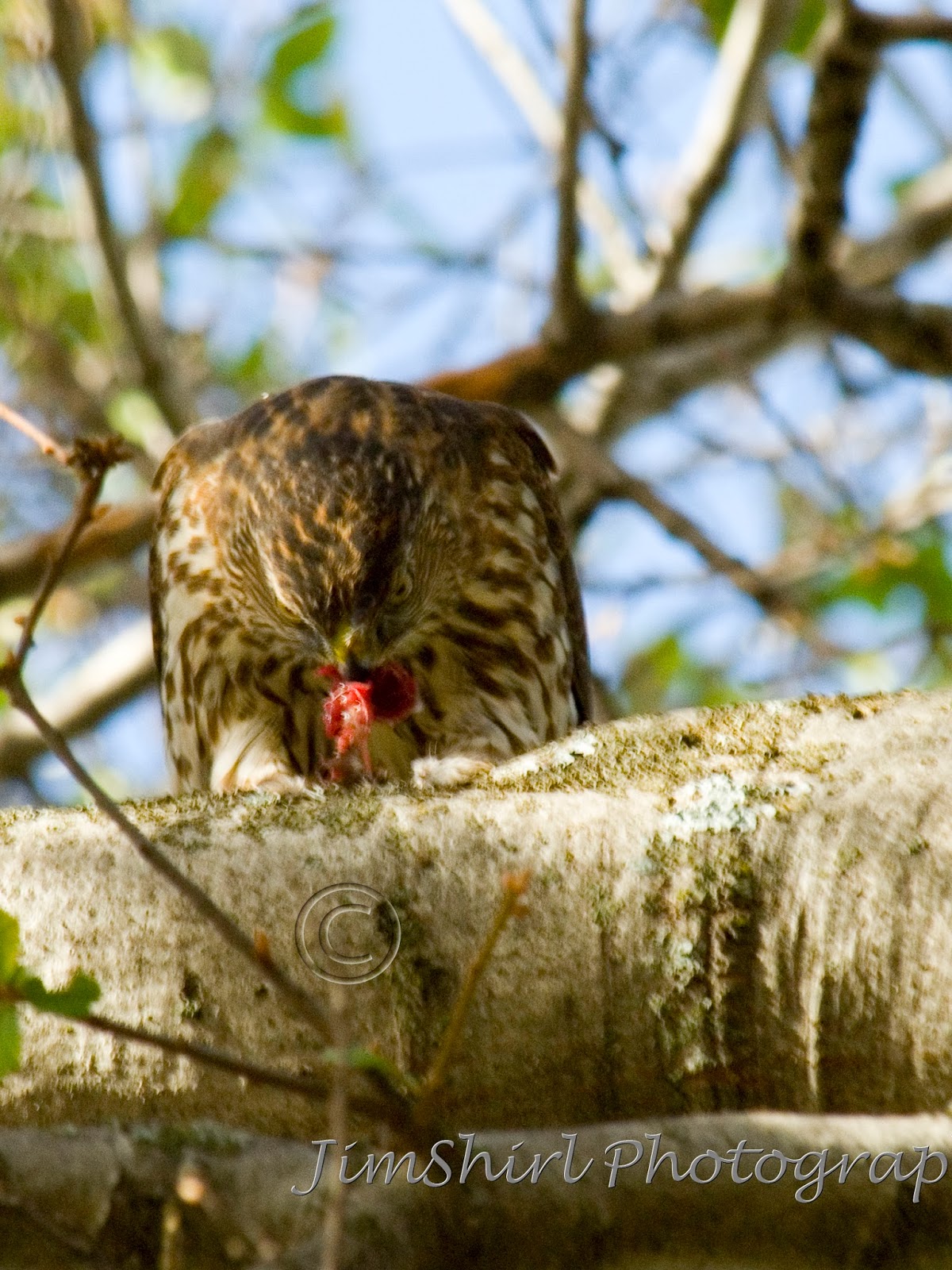