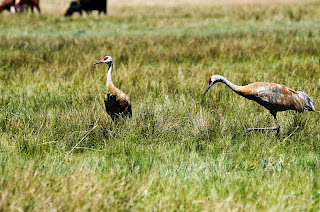 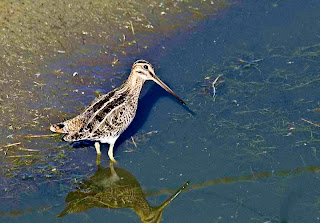 THE SANDHILLS ARE BACK !!!   "What ever happened to Summer"  Shirley asked when the temperature dropped to 35 degrees just north of Truckee yesterday. It was August 2 and we expected it to be in the low '90s later in Auburn where we live. We really thought we had missed a month somewhere when we rolled into Sierra Valley and saw more than 50 Sandhill Cranes feeding and resting in a large brown field along Harriet road. We could not believe our eyes! The Sandhills showed up one month early last year but that was the first part of September. We were really checking on some nesting Cranes in the north end of the valley to see if the parents and perhaps a fledged bird might be seen, like we saw last year about this time. Boy were we off on our timing this year. The marshes were all dry, the Feather River was muddy from cattle and more than a hundred steers were all bunched up in a corral waiting for their last ride to McDonald's. Had we forgotten that there was little water left in the valley after one of the driest winters on record? What about the thunder storm a couple of weeks ago that caused a flood throughout the valley. The water was really gone. We did photograph a pair of Wilson's Snipe, some 1/2 grown Coots, a hawk or two, some just fledged "dicky birds" but the big news was the cranes are back. I wonder if we need new parkas for this winter?