Breakfast with the Dutch Flat Mayors

As usual on the 4th of July weekend, we head for the old gold mining town of Dutch Flat in Placer County.and the annual 4th of July breakfast at the Odd Fellows Hall.This year we were fortunate to breakfast with the two Honorary Mayors and their ladies. 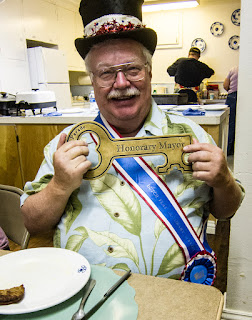 I tried to make points early on and mentioned that I was a personal friend of Jim Gould, who died recently and who's Great,Great Grandfather had owned the nearby gold diggings and the Dutch Flat Gold Mining and Ditch Co.That did not seem to ring a bell so I mentioned my old friend Jim Stewart who also owned the nearby Gold Run hydro mine along I-80 and ran it for 50+ years. Blank stares registered nothing so I mentioned that we were photographers with the Bay Area Porno Magazine and were trying to find a cover photo of a good stud for our up-coming August issue and wondered if I could take their pictures. The heavy-set mayor glanced down, I guess to see if his zipper was closed and then said " I guess so". His lady had stopped eating and was looking at me with eyes as big as saucers.I took the pictures and showed them the results. They thought the pictures were great and wondered when the pictures would be published. I said we usually post a copy on the wall of the Gold Run Rest Area's restroom and it should be up by the end of the month. The ladies were now laughing so hard I saw tears roll down their cheeks so we thought it was time to leave. The Mayors asked where we were going and I said we were going to "Nature-ize" and photograph wildlife and flowers along to Drum Forbay-Bear Valley's Culbertson road. I overheard one Mayor ask his lady if I said Forbay or for-play. I think that story is next.