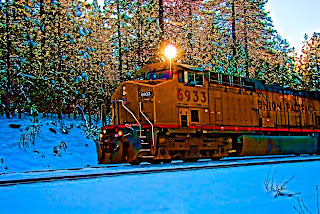 We were staked out west of Dutch Flat, watching the Union Pacific Railroad tracks for the late afternoon down- mountain freight; hoping for a photograph of a snow encrusted engine with its yellow headlight pushing thru the late evening snowfall. I had four-wheeled thru the frozen crust making a sound like breaking glass to park along the tracks on a seldom used dirt road. There were no dwellings for miles on this road, but somehow two large Newfoundland type dogs ran out of the snow-covered woods across the tracks and barked at us like we were unwelcome intruders into their icy domain. Our cameras are ready and the windows are down so we can hear the approaching train.

I poured two cups of steaming coffee and we munched on our Kashie bars and tried to stare down the barking inferno across the tracks. Earlier I had shot at high speed straight into the setting sun at U.P. # 6933 eastbound near the Dutch Flat diggings. One shot was not bad with a star effect had on the sun behind the engine .Now we are ready with the camera all set when a train comes around the curve up-stream with the setting sun behind our backs. The barking finally stopped and the dogs across the tracks went back into the woods.

Time to put the thermos and energy bars away in the back of the truck; no need to spill hot coffee when the train rushed around the corner and I started shooting like a demon trying for that great train  picture. I stepped out of the truck and walked to the rear to open the camper door when 30 yards away something big and black glided out of the woods on the left side of our access road and stopped in the snow on the road with a solid stare that made me hold my breath and check the holster on my belt. I strained to see, but this beast had a 2 inch tail that stuck straight out and ears that stood straight up, with maybe tassels on the ears. The body was really dark and thicker than it should be. The light was poor and I really needed my binoculars left on the front seat. He paused and then glided into the very thick snow covered manzanita, and then stopped. I could feel the stare coming from just below his ears .A faint beam of sunlight refracted off the snow struck his face and one eye went bright green. I could see the outline of his thick black body thru the brush. As silent as he came, he glided away into the thick snow covered jungle.

The train picture did not seem that important now. We waited 15 minutes more and gave up. We drove over the tracks of the unknown, unable to tell what it was from its tracks in the too hard snow.

It is the next day now and as you can tell, the thoughts of those green eyes are still with me. With more than a half century of wildlife observations in California behind me, I am not sure now what I know about wildlife in California. I do love photography. 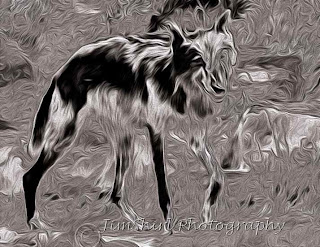