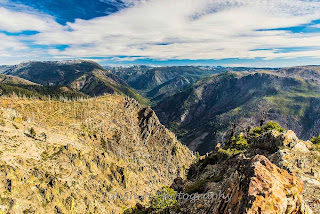 ROYAL GORGE OF THE AMERICAN RIVER
By Jim and Shirley White

Tahoe National Forest Supervisor Richard Bigelow saddled up his horse at Emigrant Gap, mounted, and headed south for Westville on the Foresthill divide to investigate a report of a large forest fire burning near Michigan Bluff. It was 5 A.M. on August 1, 1909. Ranger Bigelow had given orders to the trail crew at Mumford’s Bar on May 18th, to build a trail from Mumford’s Bar on the North Fork of the American River to Emigrant Gap for just this kind of emergency. He had a report that the trail was completed and now was the time not only to inspect the trail job, but to use this new trail to lend a hand in fighting this important fire.
One hundred and four years later, on November 30, 2013, Shirley and I headed south in our jeep, along this same trail to photograph the Royal Gorge of the North Fork of the American River. About ten miles of this trail is now a road and paved. Near the ten mile marker we turned east off the old trail on forest road 19, headed for the abandoned site of the Big Valley Bluff fire lookout. To the East and 2000 feet below is the Royal Gorge of the North Fork of the American River. This year we could see at least a mile of the river was dry, with only a hidden flow of water below the river gravel.
In late July, 1955 I had visited with Bill Watson, Forest Service lookout at Big Valley Bluff lookout, who told me of seeing several Golden Eagles flying below his lookout on some days. The old trail to the lookout was only a jeep road part way back in the 1950’s, and I had to hike about one half of a mile to get to this outstanding view. Parts of the old horse trail to the lookout are still visible to this day.
On the recent trip to the lookout the weather was perfect. Not a breath of air was stirring, and a few clouds made the scene special. We photographed the Gorge from a number of promontories to the east of the lookout always looking below, hoping to see an Eagle. After a couple of hours it was time to go and we reluctantly headed up along the sharp ridge out with one glance back down the canyon. And there they were! There were two Golden Eagles, with fixed wings, gliding below us. I let out a yell, stopped the jeep, grabbed the D-7000 with the long lens, and drew down on the birds below. The auto lens would not focus! The target was too small, the lens was not fast enough to focus, who knows what went wrong? We missed the shot. The birds apparently landed below the point of the cliff where we could not see them. Who knows how long they were going to sit below us? We missed the shot and it is just part of the game.
Ranger Bigelow rode his horse down into the American River canyon 2000 feet below and then back up 2000 feet to the road at Westville where he ate dinner. After dinner he received a message that the fire had jumped over Deadwood Ridge. He saddled back up and was on the fire line by 4 PM.  He supervised the fire fight till midnight, slept on the line waiting for daylight. He then worked on the fire line the next 3 days and established a camp to feed the fire fighters.  After this fire was out Ranger Bigelow rode his horse up Ralston Ridge, to French Meadows and three days later arrived back home in Nevada City.
While sitting on the cliff at Big Valley Bluff and looking down on Mumford’s Bar, we talked about Ranger Bigelow and his epic horse trips throughout the Tahoe National Forest. I have a copy of his diary, but I really wish he had had a camera. As they say, they just don’t make them like that anymore. 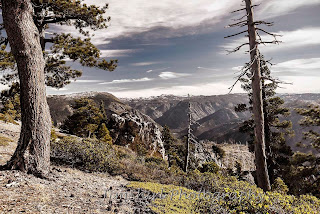 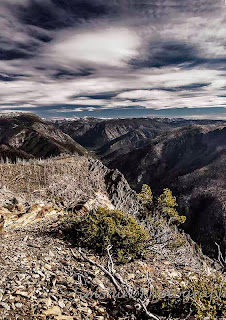 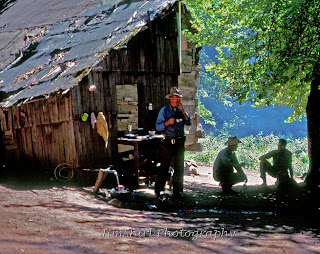